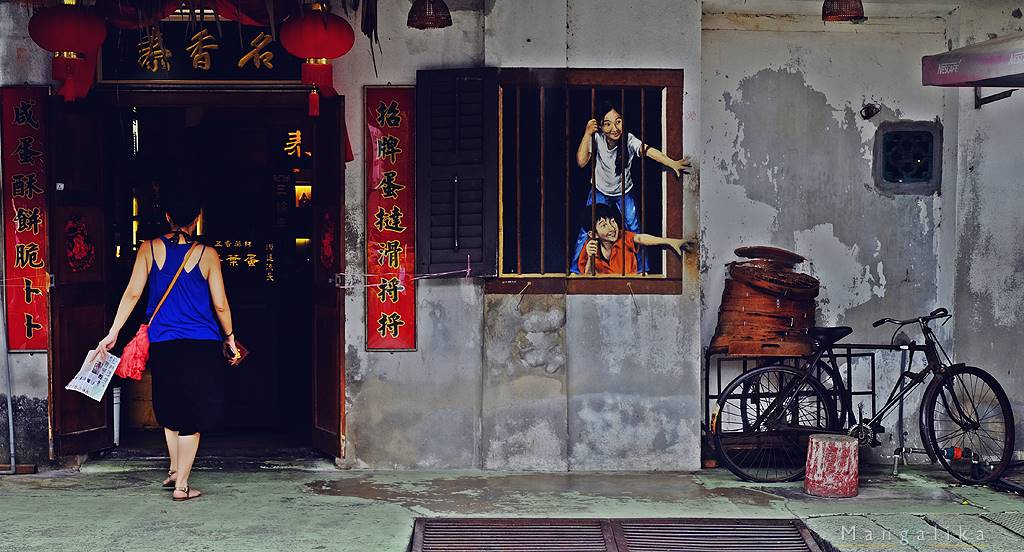 Penang, an island in Malaysia, was founded as a trade hub by the British East India Company back in 18th century. Although it got a place in the global map long before by the Chinese explorers.

Penang was never in my wish list until I browsed some photos over the internet and came to know about the project Mirrors George Town. It was by the famous street artist Ernest Zacharevic. I and my shutter-bug husband both like street murals as they help to form interesting compositions for street photography. Little did I know that this place is a paradise for street arts and has been categorized as UNESCO World Heritage site! It’s neither so far nor so costly from Singapore, our current residence. Unless you have intention to cover street arts as well as all touristy sites in one trip, just a weekend is okay. We did not have to spend hours for planning. One of my colleagues already visited Penang and another colleague’s hometown itself is Penang. So got enough information already over the coffee breaks at office.  We just chose a random weekend as the long weekends are too costly to plan in South east Asia.

We kept this trip strictly for ‘street arts, the old jetty and local food’. A day before the trip, I had to buy a 18-55/ 2.8 lens to avoid any ‘domestic violence’ over one 18-55 in our collection..(Chuckles!) As expected, I did not have to touch any wider or longer focal length at all as ‘Street’ was our main objective for this trip.

After landing at airport, we took a UBER as suggested by my colleague. That was really a cheaper and convenient option to directly reach to our hotel door at Georgetown. Well, now that I took this name let me brief about it. Georgetown was one of the oldest British settlements in South East Asia and was a hub of the nearby commercial districts. You can still find those 18th century colonial buildings all over the place. Some of them still have those broken sign boards of old trading centers but many have been converted to hotels. Our small hotel was also inside one of those buildings. Over all, to our Bong eyes the architectures and the lanes resembled not like the ‘Glittering Malaysia’, we typically see in calendars. Rather we found many similarities with some North Kolkata old roads and gullies. I am sure that has to be due to the East India Company effect!

Anyways, after dumping our bag packs our hungry souls ran for food and we ended up in a local shop where they serve soup in big bigger biggest Chinese porcelain bowls . The biggest one is so big that the serving guy himself could take a dip inside it . haha. But the teriyaki chicken and creamy chicken mayo soup were superb in taste and filling as well. Then we took a map for the street art trail and headed with our gears. It is actually a good decision to collect a hard-copy of the map or download available maps from net. Otherwise you may end up visiting same gully multiple times instead of exploring different streets. That afternoon and next day morning we covered street arts.

These art works are not as ancient as the British rulers or the historic Chinese sailor.  These were created in 2012 by Ernest Zacharevic who is also leaving his brush marks in many other cities all over the world. But when in Penang, you will just get overwhelmed by the number of arts, he created in the old walls and even on the abandoned shop doors. Some paintings are also supported by real props to give a more lively perspective.

In the day-1 evening, it started lightning. We walked towards the jetty, expecting a stormy weather already. It was a pretty thrilling experience with wind so strong while we survived under an old shade. That was probably a rest place for the fishermen. The rattling sounds, the rolling chairs, the swinging plants, crazy waves in the backwaters created almost a movie scene in that old clan jetty. I was sitting on a thick wooden stem and my Indian soul was so badly missing a cup of ‘cutting chai’.

These 100 years old jetties are actually fishermen’s village. Six jetties are owned by 6 Chinese clans and have rows of old or renovated wooden houses. From the outlook of every house, it was easy to guess that the locals are very much religious. Some small and serene temples are also there, facing towards the sea.

After the storm, the temples were lit up with red Chinese lanterns and few people came to place incandescent sticks on a metal bowl. Chew jetty among them is most touristy and local folks built up a flea market on the pathway. We pretty much liked the jetty area and went again next day afternoon. That was a dry weather and we spent the blue hour on the most photogenic jetty.

Finally there comes the most unexpected event. On the Day-2, post lunch we headed towards Lorong Chulia to explore some more street arts, that time the streets around our hotel was quiet and normal like the other day. But we returned only to see a fully different look. The otherwise quiet streets were packed with pop-up food stalls with specialty street foods; plus dragon and lion dancers, doing processions in different lanes. Without knowing the occasion we almost jumped into the vibrant ocean of crowds, tasted various street food and crazy drinks, walked with the dragon dancers and also watched a traditional dance performance. Later we came to know that was the last day of Lunar New Year in Penang. This festival is known to be one of the biggest celebrations in Malaysia.

Overall our Penang trip was very interesting. We purposely avoided the over hyped Penang hill and the upward train as it becomes too crowded on weekends and many including our uber driver told that the streets would be more interesting. In fact it was a pleasant surprise that we enjoyed the vibrant Lunar New Year fest around George Town!