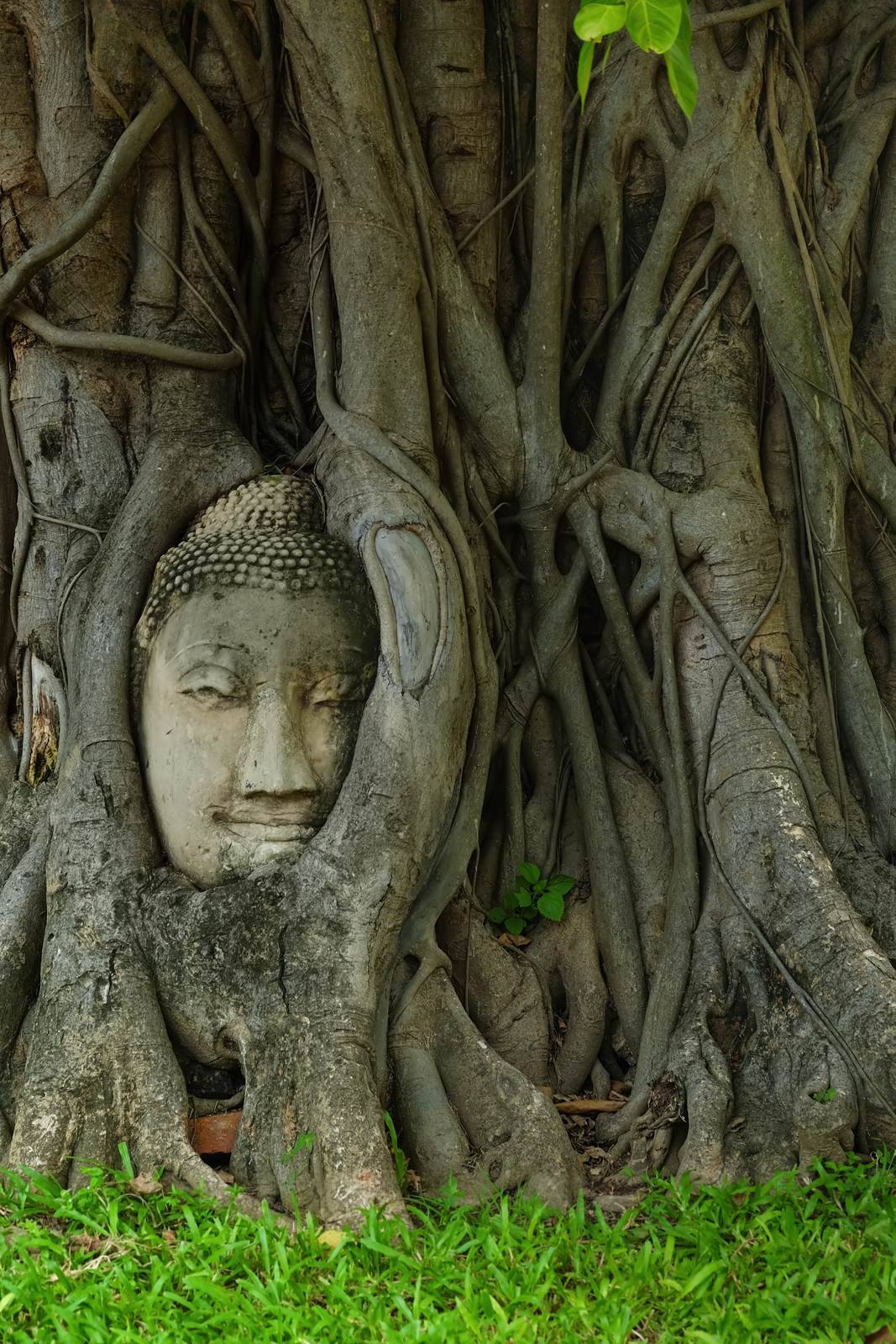 Talk about Thailand and most of us would already dream for the exotic beaches, scuba diving, night life or the golden pagodas. Without actually visiting Thailand I felt like experiencing all of these repeatedly through my friends’ FB albums. But we always tend to prefer a soulful, serene vista or a secret hideout over a crowded destination! So a sudden long weekend plan for Thailand made us think beyond the touristy places. That is when I learnt about Ayutthaya, the ancient Thai capital! Without giving a second thought we included this UNESCO site in our bucket-list.

Exploring the ruins of Ayutthaya was like a whole new way of knowing Thailand. People who visited Hampi (in India) might also find a lot of similarities like the rise and fall of a prosperous Empire, scattered patterns of numerous ruins and close vicinity of a river. Dating back to 1350, the outside world used to praise this Thai Kingdom as one of the flourishing Empires of East! It was based in the valley of mighty Chao Phraya River. But the time never flows in same way! The city fell in 1767 after the Burmese invasion followed by a Chinese attack. A glorious kingdom got destroyed in war!

Our sojourn towards the former Thai capital started from Hua Lamphong, the main station of today’s Thai Capital. When possible it is good to ditch the luxury of private AC cars and roam like a local. Not only you can explore a new country in grass root level but also it shows your little, nice gesture towards the environment.

Before the train arrived, we saw a fascinating practice by the locals. The station’s loud-speakers started playing the Thai National song. Every single passenger including the cleaning staffs stood up to show respect; the mothers also made their little, naughty fellows stand still until the music ended!

We boarded the train with many other locals and a few British bag packers. As we settled with the seats the diesel engine whistled past the long stretch of city area. For one last time, I glanced through all the notes and routes which I had penned down during my initial research. Ayutthaya is one of the less known sites, so we could not expect to see a professional guide right after getting down. A bit of self-study helps here to comfortably enjoy the grandeur and the historic significance of the place!

Wat Mahathat Temple Ruins were registered as a national historic site by the Fine Arts Department on 8 March 1935. The main prang (a tall tower) fell apart in 1911 during the reign of King Rama VI.

After getting down from the train we had to cross a small river by a local ferry and reach at the main island of ruins. Exploring Ayuthhaya on foot is not recommended because of the year-long severe hot weather. Hiring a local tuktuk is a better idea. Within every kilometer we could visit multiple ruins. It took about 5 hours and we were done with the main sites.

Wat Mahathat, built even before Ayutthaya became the capital, was the religious center with many relics of the Buddha

What we could see in most of these sites were just the vigorously ruined shrines and broken Buddha statues, surrounded by nature!

Ancient Buddha Head, nestled within the tree roots for years after the Burmese attack and destruction

Every time I visit any ruins it makes me wonder how human greed can just destroy the finest creations of another human! However, nature has its own rules. I loved how the tree roots simply grew around the Buddha face for past 250 years and secured this eternal smile!

At many places, we could see the same bell shaped stupas which we noticed in Yogjakarta and Myanmar.

The life of Buddha is portrayed in the mural paintings on the inner walls.

It is said that the attackers had set fire to this temple and melted the 343 kilograms of golden Buddha statue that took about 3 years to get built!

All the majestic ruins of this ancient city are probably Thailand’s best kept secrets. After the war and devastation, Thai capital shifted to Bangkok and Ayutthaya was abandoned only to get slowly claimed by the jungles. History thrived in the lap of nature.

Treasures and relics, recovered during the restoration, are now kept in Chao Sam Phraya National Museum.

It is a good idea to start as early as possible for Ayutthaya so that most temples could be covered before the unforgiving Sun takes its full form. Last but not the least, there is an option for taking Elephant ride around the temples. My sincere request for all the travelers is to avoid this one. You will get myriads of other alternatives to make the trip memorable; there is no pride in promoting captive wild life tourism. Please read details here to know how the elephants are domesticated and what could be the consequences.